What Is Entitle-itis? Does My Teen Have It?

Even though you have most likely never heard the word entitle-itis, it does exist in the world… and as a parent of a teenager, you may be very familiar with it. Not actually the word…but the “figurative inflammation” of entitlement.

First, let us understand the true meaning of the word  “entitled.” The original official definition is:  “Believing oneself to be inherently deserving of privileges or of special treatment.”

Secondly, let us understand the various types of entitlement. You most likely have heard of, or know someone who is a narcissist or has narcissistic tendencies.  But did you know that there is a psychological condition named “narcissistic entitlement”?

Are we as parents contributing to a culture of entitlement?  According to the parents I work with, entitlement is a big problem for most of their teens. Entitle-itis has become a common teenage syndrome!

How does a child become an entitled teenager?

No well-meaning parent would ever intentionally create an entitle-itis monster. These entitled teenagers are created when we overcompensate by giving our kids what we never had as children. We may be in a better position financially than our parents and believe we are making life easier for our kids by giving them the things we always wanted but never had. Sometimes wanting and not having creates a better person. Sometimes wanting things and consistently getting them creates personality traits that become unbearable. Entitle-itis.

If you have worked with me in the past you know exactly what I am talking about. Over the years of working with parents who complain of this one particular issue, I coined the term, “Entitle-itis”.  It fits.

Entitle-itis: Feeling entitled, acting entitled, a need for instant gratification and a total sense of entitlement. A deep sense of one’s importance and superiority. An expectation of special treatment and an unrelentless need for more just because. Frequently experienced by children and worsening over the teen years. Developing into an out of control teen behavior that only gets worse over time. Often caused by “good intention” kind of parenting.

What are the symptoms of the Entitlement disease?

Do you recognize these symptoms in your teenager’s behavior?

I did! Having personally been through this with my own child, I recognize the disease very well. I felt like I was on a big fat hamster wheel trying to do everything I could just make him happy. I ran from store to store in an attempt to get what I thought he wanted; the elusive magic pill that was going to make our lives calmer and give him a sense of happiness. 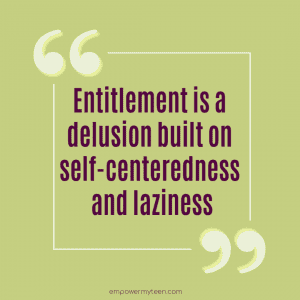 To hear just once, “Thank you, Mom! You are the BEST!”  But hell no, the only thing I got was another request/demand for the next best thing. It never ended. I gave more and more and the only thing I got in return was more demands and a rotten attitude. If he ever had a shred of gratitude, it was short-lived until the next demand arose.

I am sure you know what I mean, right? Think about it…

But instead, you only get more angry conversations, him shutting down and refusing any of your requests and yelling at you that you are the worst parent ever? I used to go to sleep crying, feeling so defeated and like a complete failure as a parent.

Entitlement is thinly disguised selfishness. It is the opposite of gratitude.

Entitlement is a block to gratitude…a belief that all rewards are paid for, earned and deserved. If we interpret the positive aspects of our lives as deserved, there is no reason to be thankful.

One of the greatest experiences that can happen to an entitled teen is to have all of their luxuries removed. Bare bones. Basic necessities only. That is what all of the therapeutic boarding schools I work with offer to varying degrees. Once your entitled teenager gets over the initial anger and shock of not having all of their luxuries. We see that the experience creates a sense of gratitude for the things they do get. They are taught they must earn what they receive. This creates gratitude. They also look back at what they had at home and realize the error of their ways. All good stuff.

So now you may have come to terms with the idea that your teen has this condition. What can you do about it? Sometimes we make choices for our kids based on the way we were raised. Whether you had a little or a lot when you were growing up, there are a few things you can do to make the situation in your home more balanced, peaceful and healthy.

Advice for parents of teenagers or anyone dealing with entitled kids

Ask yourself, “What do I want my teen to learn about money and work to achieve success in life?” Then come up with a plan to teach them about the importance of finances and how working for things is the way to get them. It’s the way to earn them. This may be easier to teach with younger kids.

When kids learn to create a plan on how to create the income they need to get the things they want, they learn ingenuity and creativity. They learn what WE adults learned as kids! “Money doesn’t grow on trees.”

If we want something, we need to figure out a way to earn money which promotes healthy self-esteem and pride in one’s efforts. Plus, a whole host of other positive attributes:

Be thoughtful in setting limits with what you give your child.

Set Effective Limits on Giving to Your Child

It’s important to put limits on what you give your children. Don’t feel as if you need to give them every little thing they ask for, even if “all the other kids have one.” Let them know that you don’t have an infinite supply of money at your fingertips. Tell them from an early age that you and/or your spouse work to make money to support your family. Explain that you trade your time for money to take care of the things your family needs. This is such an important concept for all kids to learn.

Saying “no” to your child does not make you an uncaring or bad parent. It’s important for kids to know there are limits in the world and they cannot have everything they want. When your child asks for things, it’s ok to say, “You’re welcome to buy that with your birthday money,” or “Why don’t you put that on your Christmas list?” Or, “Why don’t you save up your allowance money and buy it?”

It’s important to recognize “Entitle-itis” early on. That way you can take measures to curb yourself and your child in creating this unwelcomed beast in the home. If you feel like it may be too late and you have tried everything in trying to solve this problem with no positive results, please feel free to reach out to me. I offer lots more ideas and support in parenting entitled teenagers. 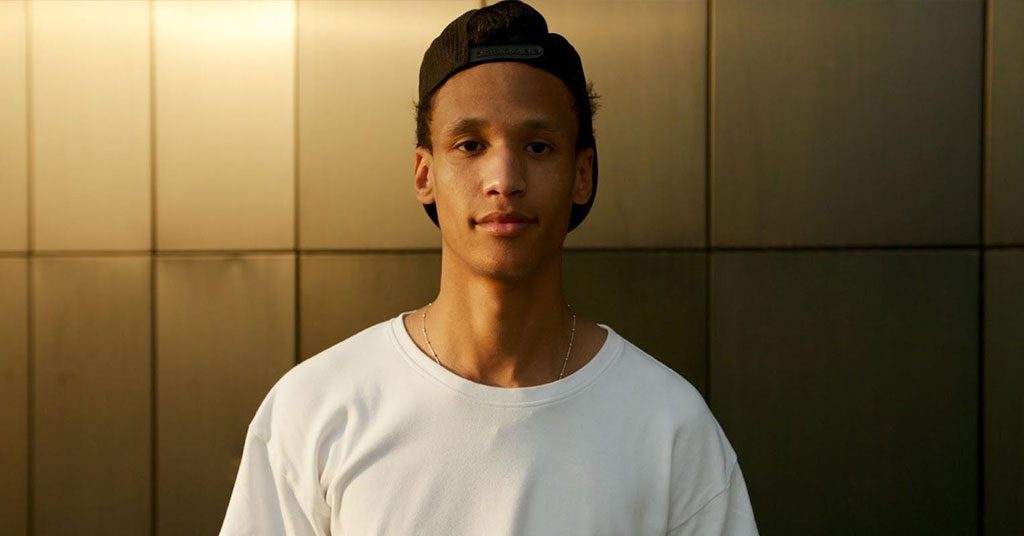 Learning how to interpret your teen’s evolving behavior is a... Thank Goodness for Mary Warren! I have tremendous gratitude for...

What Is Entitle-itis? Does My Teen Have It? Even though...

Get The Free Sleep Guide